I am waiting… not for things to start because they have; not for change because it is constant and ever so present in every decision I make. Yet, I really am waiting… for inspiration to knock me over, done! So, no; and as I am waiting, I am getting impatient to listen to Jay Ray‘s song Striven featuring Marko Saaresto, indeed, I am becoming somewhat restless… or at least, my “blog-y” fingers are. But in the end, all I was waiting for was to write a new blog post for which I had already picked the theme obviously; as usual, though, a more pressing idea showed up at my door. 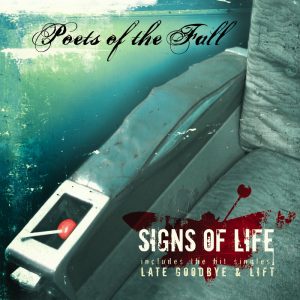 I have lately realised that within the entire Poets of the Fall discography (that is to say, about 92+ songs including the unplugged versions and the covers) I like… no, I love about 89 songs, give or take one or two depending on my mood. When I said that to my husband, he was amazed and confessed that there was not one band he could say that about.

Among so many songs to wander within, and without ever putting any real thought in it, there is always the perfect song popping up in my head at the exact right time. Sometimes, it is to help me cope; some other times, to force me to think or re-think a situation; or again, to show me another way. Today, Shallow from Signs of Life came to the rescue. I could quote the full song and say to you that it is the way it is. This is where I stand while they, aghast, look at me that way from over there… it is how accurate the song is (except, maybe for the chorus). No finger-pointing, just the urgent need to let out these thoughts out, before they eat at me and make me doubt too much.

You know that I am a dreamer, it is what makes me who I am and I feel rather proud of that. Dreams, however, are for children and I am supposed to be all grown up. Stop dreaming! No one can go through life in one piece feeding on dreams only. You won’t make it… grow up and stop dreaming. Has anyone told you that? Dreams are for children, adults don’t have time to dream… it is a scary concept to me and truth be told, I don’t really understand it. I think that it has to do with creativity or something like that.

More in my face
Than is my taste

Whatever it is, that shapes the reality of your loved ones, it does not necessarily shape yours. Sometimes, it feels like if they say it often enough, I’ll behave the way they want… the way they know… the way they can relate to. It is not really fair, but how do you explain so that they can truly understand what you mean? Show them… Of course, I play their game, and I put on the mask I never wear at home anymore… concessions and half truths are better than the alternative… disappear in shallow waters – figuratively speaking (for those of you who worry ?)

Bugger off, my dears!

I’ll do as I feel like doing, and FYI, this does not make me irresponsible or carefree. Believe me, what- where- and whenever my dreams, my feet are firmly on the ground even if I do not always sound like it. The shroud of doubt, that they like to keep me in until I am moulded into a dreamless, empty shell, is rather daunting at times… but as I get stronger, I shake it off rather easily… besides, I have what so few of us have, support and belief.

Once again, another successful pep-talk with me, myself and I… and some other guys! ?

Take care of yourselves!

POTF – Someone Special, one year or so later

Poets of the Fall – Illusion & Dream