One week after The Sweet Escape premiered on YouTube, here we go again, waiting expectantly for the video of Partir Avec Moi to start. There was a pretty noisy chatroom this time around as well. Not always on topic, but excitment makes people talk nonsense now and then. It is fun though… I was not the only “nut-job” in there, and that is quite a reassuring thought. 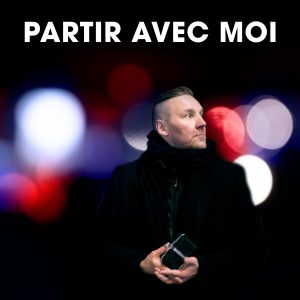 I have to admit, as I sat in my car, singing along Partir Avec Moi coming back from work, it felt really strange to sing Poets of the Fall in French… even though it is my native language… It sounded great but it felt… so strange. Suddenly, it was almost on such an intimate level I may have blushed. Maybe not to that extreme, but you get the idea: just because, for the same song, the language was switched. A tiny detail, but a great success!

Here is a question I forgot to ask though:

Why is the song entitled “Partir Avec Moi” when Marko only sings “Partir Avec Toi“? I am convinced that it is done on purpose, I just would love to know why 🙂

Here’s my theory though… the title could be the subject of a letter to his lover and the song would be the actual letter. The true meaning being “Would you leave with me, if I told you what you truly mean to me?” and then comes the song as the core of Marko‘s feelings.

It must have been such a challenge to adapt The Sweet Escape to French… As Marko said during his interview with Misfit at Heart (read full Interview):

“I took it upon myself to write the adaptation. Intimidating and fascinating”

This is a beautiful song and I promise, I am not just saying that. There are some pretty happy French (and non-French) fans out there with Partir Avec Moi‘s release. You nailed it!

I know how well Marko speaks French – despite his modesty about it – and his lovely accent when he does brings this “je ne sais quoi” to whatever he says or sings… The language brings a totally new mood to the song, and warmer feelings… colors.

When Marko sings in French, with his Finnish/English accent… it is so touching. I love the way he pronounces: Accroché par ce sentiment de disparition… Mon Amour… Mon coeur dans ta main…

Goosebumps all over so I can melt into one of those cosy smiles that show I am finally relaxing into the song… On Friday, I had it on full repeat, the whole day… I still cannot get enough of it.

He can speak French to me this way any time.

My favorite lines are as the Director Miika Hakala mentioned on social media:

Those two lines are absolutely brilliant. I cannot explain why I love them so. I know what they mean, obviously, but they have such inherent layers of meanings… red threads going in all  directions and I don’t know which one to pick… I am in awe, really.

Marko, with the collaboration of French musician and producer Laurent Sari, wrote a beautiful adaptation/French version of The Sweet Escape. The cool part is that the only major difference in the lyrics is what turned the story around and the ambiance of the song. That way, the story-telling is completely flawless.

We all noticed THE major difference in the lyrics, whether we are native French speaking or not… this is somewhat the international language of love:

From doubt of reciprocity to certainty… what do you think?

In the English version, the line:

It has the same meaning but the wording in French is somewhat more direct, more to the point… and slightly less “romantic”. To me, the word “divorce” has a rather negative connotation, while using only this negative form “n’est pas” (=is not) in French – although still pretty negative – sounds smoother to my ears. Either it is a conscious choice or barely the restrictions that the French language imposes… or maybe both. In any case, the result is most effective…

The French lines are once again more optimistic and warmer. In my opinion, it is the same idea in both languages, no question; although I find that, in French, there are less hidden meanings… no need for ultraviolet light anymore, the feelings are out in the open and the subconscious influences are not in control anymore.

A little snag on that note: it seems to me that the video shows them (the subsconscious influences) trying to sneak in now and again… Watch and compare Marko‘s demeanor from one video to the other… sometimes they are similar on both videos, and some other times the complete opposite.

Added to this, the slight shifts in colors and sceneries – from the same time frames on both videos – emphasise more than just hope renewed but rather a joyful anticipation of what is to come.

I got a bit worried at the beginning since it felt like a simple repetition of The Sweet Escape. Slowly and surely though, the story takes a slightly different turn and the differences, although subtle, multiply. For instance, take the still-shot of the song, used to promote it, a friend of mine sent it to me early in the morning to point it out to me… look at the colors she said. The “ultraviolet” has faded in Partir Avec Moi. So what does it mean?

I have a theory…

What if, The Sweet Escape represents the doubts, the uncertainty eating at Marko therefore meeting with the album’s theme which – as you recall – I called: the hidden influences of one’s subconscious. The slight shift in colors, I previously mentioned, in Partir Avec Moi could be that reality catches up and shatters the doubts and uncertainty. The longing from The Sweet Escape is still there but in Partir Avec Moi it sounds different… it is somehow a happy longing, because what he is waiting for is really going to happen. Tricky to explain since these two videos are literally feelings put on film… who else than Miika and Poets of the Fall could nail that? Right!?

I will say this: the subtle differences from one video to the other are a fun challenge… I guess I might play more with that in another post: The Sweet Escape vs Partir Avec Moi… so stay tuned!

Poets of the Fall – Spot the difference

Poets of the Fall in a Perfect World – UV