Last Friday, Poets of the Fall released their new single and video The Sweet Escape. Many joined the countdown to the premiere on YouTube (Yours Truly included). This Friday comes the French version Partir avec Moi, and I thought what best way to wait for it in Poets of the Fall‘s company…

Dream come true: interview Poets of the Fall for Misfit at Heart… Check!

The band has kindly agreed to answer a few questions. Happy reading!

Interview with Poets of the Fall

M@H: Thank you for agreeing to this interview.

M: Hello, and thank you for having us, it’s our pleasure. 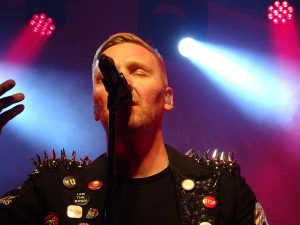 M@H: The way you write your albums, as trilogies, is a cool concept and quite challenging too (both for the fans and undoubtedly for you as well).

M: Thank you. It’s both terrifying for a writer and challenging to go and extend your process over multiple albums. But it also gives you a way forward, not an easy path, but usually something you look forward to completing. It’s like you set yourself up for interesting little hurdles to get over with every new album, song, style choice and lyric.

M@H: How do you choose the theme of a trilogy contra the ones of the albums?

M: I suppose there is no one way of getting there. You pick a topic that speaks to you on many levels, and you take a look at it from as many different vantage points as you find meaningful. Then it’s a long, both arduous and invigorating process of going back and forth, testing ideas and thoughts and listening to where your intuition tells you to go. Its not always very straight forward, although there have been times, when a song or a lyric has come out in just a matter of minutes literally. Of course the way to the final product takes much much longer, with all the recordings and production and what have you. A trilogy begins as a forethought, which in the end, becomes the sum of it’s parts. Overall I think you write about what you consider important, and you feel you have something meaningful to say on the matter.

M@H: In your latest trilogy, the first two chapters could maybe be summed up like: Clearview as a clear understanding of one’s path and then Ultraviolet as the hidden influences of one’s subconscious.

M: That’s definitely one good way to look at it. 🙂

M@H: Do you know what the next album’s theme might be about?

M: I have the general idea, sure. I’ve harboured the idea ever since starting Clearview, but it’s also evolved since and it’s just because of this evolving, that makes it interesting and also too early days to say what the next album will become, once we actually get our hands on it. So no sneak peeks yet. 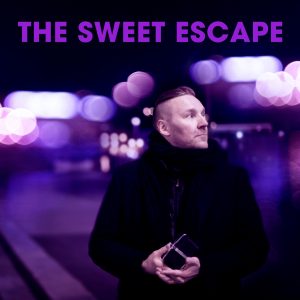 M@H: The Sweet Escape is Poets of the Fall fourth video directed by Miika Hakala. No complaints here, I love his work. What makes it so special to work with Miika?

M: For us it’s probably the fact that we all get along so well. Miika has a brilliant mind and he’s very rich with ideas and his attitude to making film and video alike is very eclectic. It’s like there is no ego there, nothing standing in the way of progress and expression, just raw talent. We are all after the best possible presentation of our ideas and we all have a wish to grow as artists. I also think it’s valuable to surround yourself with people you can learn something from.

M@H: What more does he bring to the songs, than other talented directors may not?

M: I think everyone we’ve worked with has had their own flavour of wonderful fortes, so I wouldn’t dream of comparing, rather I raise my hat to each in turn for their achievements.

About the double single

M@H: I thought the next single you’d release would be My Dark Disquiet.

M@H: How & why did you choose The Sweet Escape?

M: I think, originally, we chose it for the vibe. Everything else, like doing the French adaptation came a bit after the fact.

M@H: How did the French version, Partir avec moi, come about?

M: Well, ever since Françoise Hardy did her adaptation of our song Sleep in French, we’d had this idea of maybe doing a French version of one of our songs at a later time. I suppose my spending last winter writing songs in Nice, France, had something to do with making the idea seem more tangible. When I got back, I believe it was Olli who suggested we’d give it a shot with The Sweet Escape. I’m in no way fluent in French, but I do speak “un peu” and of course, I love the language, so I thought it was worth a try. Turns out the song sounds pretty damn good in “en Français”. Our hope of course is that others will agree with us, once they hear the it. I know it’s a one off for us, since my writing works best for me in English (or in Finnish) and adapting a text into a different language takes a lot of effort. Besides Poets of the Fall is ultimately sung in english, so… But hey, try anything once…

M@H: Did you write the adaptation? Did you have any help and from whom?

M: Yes, I took it upon myself to write the adaptation. Intimidating and fascinating. And of course, I didn’t do it alone. I enlisted the wonderful help of a fellow musician and producer Laurent Sari, who is French. He was a huge help. Together we were able to talk through all the fine details and minute differences in meanings in the original lyric and decide what and how to convey the story in French. Stuff I couldn’t have known with my limited grasp of the French language.

M@H: The joke was really on the fans when you announced the release of Partir Avec Moi on April’s 1st.

M: Sure, but a kind joke, nonetheless. 🙂

M@H: How expected were the fans’ reactions? Did you take bets ??

M: We didn’t make bets, but it was interesting to see the reactions. I think mostly because we didn’t know what to expect.

About Ultraviolet European tour 2019 … so far

M@H: After a year or so of touring in Europe, it is safe to assume that it has been a successful tour. Congratulations on that by the way… about time I would say.

M: Thank you. Its gone really well, and we’ve had great shows with the wonderful audiences everywhere.

M@H: Is there any chance that you would consider releasing a second live DVD in the near future?

M: Never say never, but we don’t have any such plans at this time. It’s a huge undertaking to get one done, both financially and time wise and with the market for dvd’s dwindling, so I dunno. Having said that, it would be a good idea, if the right show comes along.

M@H: Being French, I have to ask… ? What is the fascination with France?

M: You have a beautiful country with all it’s rolling hills and vineyards, food, your lively people and culture and the Cote d’Azur. What’s not to love?

M@H: After Françoise Hardy’s cover of Sleep, have you met her while in Paris?

M: Unfortunately our touring schedules being so tight, we were unable to organise a meeting while in France.

M@H: You said that it might take longer to release the next album, since it was a rather stressful process this time.

M: As with any long project, an album project naturally contains some days that are better than others. Still I wouldn’t put it down to the potential stresses of a project to decide to take more time than usual for the process. I’d say, that it’s rather due to the fact that we want to give ourselves more time to live and experience our lives in order to write a great new album, when the time comes. Then again it could be that we are full steam into the project before we can shout: “wait”… but that’s life, it happens to you while you’re busy making plans… (was it John Lennon who’s widely credited for coining that phrase).

M@H: Do you think you might consider Alchemy Vol. 2 while the fans are waiting for the next album?

M: Would love to, but considering that we’d have to make that album too, there’s probably no time for it.

M@H: Last words for the fans…

M@H: Thank you Marko and Poets of the Fall, for taking the time to answer my questions.

M: Thank you so much, have a lovely summer!