We’d had a nice after show in Krakow, having a beer with Oksana, Elin, Alice and Brigitte at the hotel. Some loud laughter about “strange” odours – lol – and noises… then off to bed. Saturday morning,  6 am… time to get up, or was it later? No matter, our train was scheduled at 8:53 am and there was no time to waste.

Breakfast was alright, but I must say, I was really tired. We met with Susan, Aleks and Ana at the station just in time to hop on to the train, destination Warsaw. I usually don’t sleep in the train, but this time, I just put on my Poets of the Fall “calm” playlist and fell asleep rather quickly. Two hours are, however, not enough to recuparate… at least, not for me. But I was too excited for what was coming to truly be able to relax anyway.

From heat to freakin’ cold 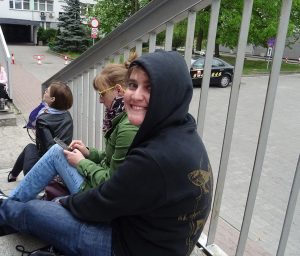 Once we checked in at the apartments, we went for lunch and proceeded with heading to the venue – Proxima. Not as nice as in Krakow, surrounding-wise, but not so bad. Of course, we had not realised it would be that cold, so Oksana and Susan headed back to the apartment to fetch jackets. Have you heard of the Chaos Theory? Well, getting transportation to go back and forth to the apartments felt a bit like that. In the end though, it all went well, mostly thanks to Aleks: our Poland hero! 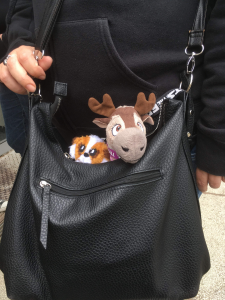 Have you ever met Pam? Such a cutie! She brought her friend Bernami whom I adopted that day. They are of course best friends and we cannot wait until we meet again. That day was Pam‘s mama’s birthday, and she got her presents (which you probably saw on diverse social media). Love and friendship were the colours of the day… despite the grey weather in Warsaw.

Of course, after such an affectionate encounter, Pam really wanted to be front row, so I obliged… She even poll-danced! She fell at the beginning of the show and was saved by Jani, thank you sir, very much appreciated! She fell in love with him that day ♥

I was on a mission that day, and I did not really manage to talk to the band as I had planned in my head… shocker, right?! Always sounds better in your head, but when it is time to let it out, your mouth is making funny noises that are not even close to what was in your head. I wanted to ask Captain how he was feeling, wanted to chat a bit longer with Jani and Jari… but nope, nothing. In the end, I managed to thank Marko properly, and without forgetting half the words, for signing the card for Pam’s mama. Next time… gosh, I always say that… Darn! What’s wrong with me? 😛

The two VIP songs were Late Goodbye and Children of the Sun. I have heard them so many times in VIP sessions that you’d think I’d get tired of those… NOT! I must admit though that when Marko is engaging the audience – ie Bibi & cie – with jokes and funny comments, it makes it for an extra entertaining experience. Just a thought though, when Marko is saying that they will play another song, remaining silent to such a statement won’t do… seriously people!!!

Video by Aleks – used with permission 😀

Poets of the Fall Crew – Nerdmoot in Poland, part 1

If you wanna know how the waiting for the show went, I suggest you read part 1 of the Poland saga 😀

I had talked about this in part 2, so I thought I’d complete with the information I received from Aleks. Do you know, I tried to read the first book of The Witcher‘s series, but I’m afraid I really did not like it. I am rather an All Soul’s Trilogy kinda gal. However, I do like the music the band is using on the live intro… I added it to my Perfect Concert Setlist 😛

I cannot say I remember much of the show… mostly I remember the feeling of it… but I can say this, although Krakow was indeed memorable, Warsaw was out of this world. The audience was wild and loud; the energy it gave to the band, I literally saw Marko get his fill of it and bounced on that stage like I’ve never seen him do before. It was really cool to see and the feel was amazing. I felt this energy myself as I started working again on Tuesday… I’d never experienced this before, but I take that again anytime.

Up close and personal

This time, no space between the stage and the audience, which meant no photographer… tjoho! It also meant extreme difficulties to get good shots. My Sony CyberShot DSC HX60 was probably not well calibrated – forgot to ask Ana to check it, but at the same time, we were so close to the stage that taking good photos was almost impossible… at least, it was so when you wanted to capture the pretty faces. If not, some great shots came to light anyway, like Marko’s b.tt / bandana 😉

Marko was wearing the quiet badge… I’d heard about it but never actually saw it before, it said: ” I am in ♥ Silent ♥ Mode ♥”. I guess that with all the travelling by bus from Prague, to Vienna, Budapest, Krakow and Warsaw, it must have taken its toll on the guys. Marko really needed to spare his voice at all costs.

I have to add that Pam was very disappointed and a bit jealous too, ’cause she was completely ignored by Marko. She had been replaced! Yes, you read it right, replaced by a tiny pink teddy bear who had a warm place in Marko‘s back pocket (you’ll see it in the video below). This was unbearable to poor little Pam, but she was first row and feasted on Jani never ending smiles. In the end, all was good.

I am always looking forward to Rogue, but this time, Choice Millionaire kind of won my heart all over again. Not only the fact that the energy level of the song is mind-blowing, but Jaska/Ollie “wave” number was joined by Glen: a contagious happy dance to say the least (from 0:32 in the video below). I never had chills while listening to this song, but the way Marko sings it live makes me wish they had recorded it that way. It is difficult to explain with words how his performance impacts me, you’d have to be there…

The part I love is by the end of the song, when he sings the bridge for the second time (I underlined the part):

What I miss on the setlist

There is something very special with Poets of the Fall, and that includes the ballads. They are always so emotionally charged, that seeing them live brings the experience to a whole new level. Sleep and Cradled in Love are off the setlist, but the band still has plenty of ballads that could be played live such as The Labyrinth, Moonlight Kissed, Someone Special, or more recently Angel, In a Perfect World or even Moments Before the Storm. I miss this kind of emotional connection…

For sure, I am going back to Paris, France in October. My own birthday present, as always… Probably Lisbon, Portugal in November. Eventually, Turku Viking Grace in August (if I am not alone going there, and if my bank account allows). Until then, some new exciting releases are coming our way to keep us on our toes…

PS: Markus & Marko please make sure to get well soon ♥

See you on the road!

Poets of the Fall Crew – Nerdmoot in Poland, part 1