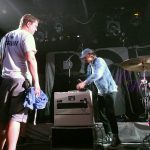 It all happened in Krakow and Warsaw, Poland – April 26th and 27th, 2019. Standing in line can be tiring, and annoying (it’s always either too hot or too cold, take your pick, we had both)… at the same time, we are doing this to ourselves, right?! So we should not complain and here it the positive spin: It can also be very entertaining.

When Poets of the Fall VIP part is over, the support band Blackout Problems needs to set up his stage. A lot of focus, bearing, rolling and un-rolling cables; setting up the drums, the pedal boards etc. Fortunately for Moritz, Michael, Marcus and Mario, and Paul, Poets of the Fall Crew has given an incredible helping hand every time. Have you seen how ants work, going back and forth with their load of whatever it is they carry? It was about the same thing when watching this Crew and Blackout Problems on that stage (hence the blurry photos, they are moving all the time – lol) 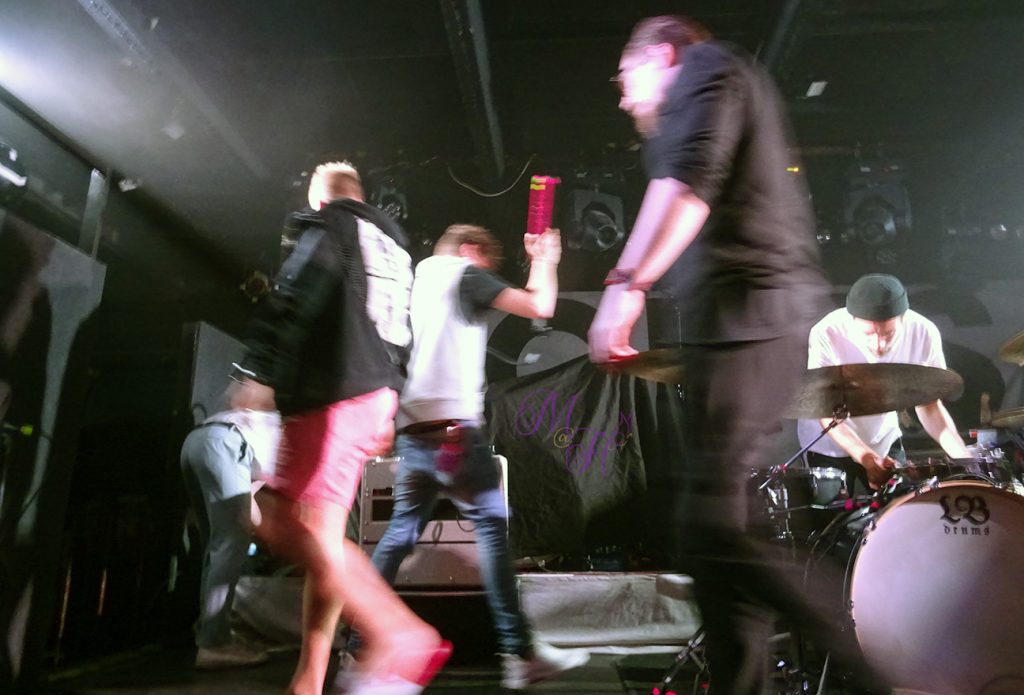 Fast and efficient, plug this and that… Glen helping with the drums and then standing behind the mixing table (is that what it’s called?) and having a blast during the half hour of Blackout Problems performance… getting ahead of myself now… hang on!

It is very entertaining and helps passing the time while waiting. Even during the show, as Moritz gets off stage (kicking me twice in my cracked rib in Krakow – lol – I ducked better in Warsaw) to sing in the audience, Paul (Photographer and technician (?)), appreciated the help from the audience when we put the mic-cable back on stage… we got a thumbs up in Krakow! In Warsaw, Glen hurried to the front of the stage to tend to the same cable, with the help of the same familiar faces from the previous show.

When in Warsaw Glen was running a bit late with Ollie‘s pedal-board (some technical problems that completely escape my understanding), Marko came hurriedly to assist him. Then the tour manager – Vesa – stepped in as well and helped with the last things, bottles of water and such to each station… and Glen, moving them slightly to the spot they were supposed to be as the most natural thing to do.

While waiting in Warsaw for the signing part of VIP to be over, my hands were hanging above Jani‘s pedal board. Glen was sitting in front of the drums with Panu, chilling and talking quietly… smiling a lot too, I wonder what they were talking about… when suddenly, Glen looks at me and says: “Don’t touch the buttons!” I held up my hands playing innocent and replied something like: “Caught in the act!” and we laughed…

A very well-oiled machine, I must say. I was in awe and these are fond memories I will keep with me for a long time.

So give it up for Poets of the Fall Crew next time you’re at a show, they deserve it just as much as the band.

Until next time for Poets of the Fall – Nerdmoot in Poland, part 2