Today is a special day because today I have a special guest. Her name is Susan B. (Tobyanca) and I believe some of you already had the good fortune of meeting her. “Poets of the Fall nerds”, that is what my husband calls us – Susan and I. So let’s not disappoint, right.?  Since we are two very chatty writers, do get comfortable my friends, this post is the longest one yet… so, get a cup of tea or something ☕? 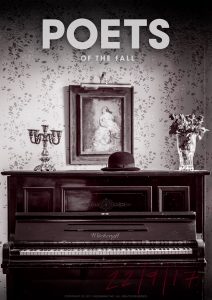 Have you ever heard of Finnish filmmaker Miika Hakala?… Hmmm, nope… never. Surprising?… Nah, probably not either… Surprised? Absolutely, greatly and happily… Of course, I am talking about the visionary artists who created Moonlight Kissed music video. The thing is… at first glance, it might look like a romantic cliché turned sour… in truth, it is easy to chip the cliché paint away and watch a bit closer. In Finnish magazine “Soundi.fi“, Miika explains that he’s been familiar with the band’s work ever since Late Goodbye and that he’s followed with interest (I should think) the stories being told by the band through the years (if I misunderstood, blame it on Google Translate ?). So, not only did he use those stories to build this one, he also saw to it that some details could be spotted by the highly trained eyes of Poets of the Fall‘s “nerdy” fans. Ambitious and done! Thank you very much indeed, sir!

In the same interview from Finnish magazine “Soundi.fi“, Marko explains that “The finale combines the elements of horror and romance. There is a kind of hope or reminder that life is worth living, here and now.” And I say… right, a natural truth that we, human, are too prone to forget in our busy lives. Do you see the pattern… maybe we don’t see the same, so let me show you my vision. The invisible puppet master’s hand, that society’s decorum is (at least in this instance with Moonlight Kissed video), shatters the here and now in an instant. This is horrible, no question… yet, some things are inevitable for they are beyond our control, thus the inevitable does not matter. Do you see it? The clear view on things… Beyond the quest to find out who we are, what we want and where we fit in… there is this undeniable truth that life is short and has become:

difficult to hear at all through the everyday din.
– Poets of the Fall, Moonlight Kissed

… and yet, here and now, love transcends all.

Thursday, my iPad goes “ding-ding” and as I open Messenger, Susan is shouting: “IT’S OFFICIALLY OUT IN A FINNISH MAGAZINE!! WE CAN WATCH IT!! I AM WATCHING IT NOW!! One minute in and I’m already crying.” How do you think I reacted? As my husband said, a nerd ?… of course, I was about to have dinner, so this would have to wait right?! So I told her as much and she answered: “omg why are you hungry NOW! ?” Anyhow, I won’t fall into details, but this was pretty funny… my meal literally gobbled, I was sent to my office to watch the video ?… I spent a fair part of my evening talking with Susan and that is my first experience of the video… could be worse, right?!

When I watched the video again, I thought…  Oh, my! These first notes accompanying the beautiful aerial scenery to zoom in, to the manor are… not on the album!? I forgot pretty quickly about that as the beautiful decor pulled me in this romantic scene that almost felt out of time. Then I saw Marko‘s character drawing this stunning portrait… and wondered if Marko actually drew it for real… but he did not… these illustrations are from Marja Siira. So many small details… The feelings were so warm, and the happiness so gentle and simple… but when I saw them coming, I shook my head in denial… yet I knew, just like they did, what was to come… and my hands on my mouth, my eyes wide open in disbelief, I watched… breathless… helpless…

As Marko‘s character starts playing and singing, they both look happy and sad – or resigned somehow. It feels already like a Damocles sword is hanging over their heads. As the words from the first verse unfold, I saw the weight they bore onto the woman’s face… But he is telling her a story, that the world is the way it is, yet it somehow does not reach them, for their love is stronger than that. This is what the images tell me, of course… wishful thinking? Could be… Anyway, whether they know or not, they are here and now, choosing to be with one another and letting their feelings wrap them into the illusion that it could last forever. He tells her how much he loves her and that this is not a feeling that can (or should) be controlled. Love is a blindfold that pushes people over an unavoidable edge… a fatal curse or an eternal blessing… or maybe both.

Poets of the Fall are master storytellers, I’ve said it often enough. Moonlight Kissed video by Miika Hakala is a short film, telling a story I did not expect to be told and served by a talented cast…

… and now, I leave the floor to Susan… because she’s got an amazing story to tell… ?

“Be careful what you wish for because you just might get it“, isn’t that what they always say? I may or may not have gotten my wish in the video Moonlight Kissed. I have two scenarios for this video, one in which my wish was granted and another wholly different scenario in which it wasn’t. These are my thoughts if my wish was indeed granted. First, my reactions while watching; In the opening scene of the video with a complete view of the giant house, a thought came to my mind, “oh, another manor, like in Cradled in Love video.” But then comes the first scene with the piano, it’s crooked and a little hazy as if through the eyes of someone else, and the camera slowly getting closer to it as if this someone is walking to it. And then it begins to play by itself, and I thought, “perhaps another ghost story, it would fit with the song…“

I see the elder woman bring the young woman into the house and I think it must be haunted. I am intrigued.
But then I see the piano man in his black vest, singing his beautiful words to his love, with his hat sitting on top of the piano cabinet and I gasped out loud and thought… is this… could it be… Jeremiah? I actually whispered that in my head, “is this Jeremiah?” And I continued to watch, looking for clues to tell me that yes, this is indeed the character I’ve loved since we first saw him open his eyes in the cupboard of his crumbling mansion in the Cradled in Love video. I was getting so happy with my thought that this was Jeremiah and my eyes filled with tears. I couldn’t wait to see how this story played out!

But then out the window, the men were coming and I said NO and I paused the video. I didn’t want to see this. I waited a few moments and started it again because it obviously wouldn’t end bad, the song doesn’t! But it did, it ended horribly and I cried and thought, why? How could they do this to him? And this is when I realized that I may have gotten my wish.

You see, ever since Cradled in Love video, I have wondered, how did Jeremiah end up there, trapped in that house, never leaving, sleeping in that tiny cupboard only to be awakened when someone dared to enter. I have often wondered and wished that I knew how he died. Now I take it all back because if this is him, I don’t want to know anymore. The pain and violence of his death are just too much. And even facing this certain death, he still reaches out for her instead of fighting because the thought of never seeing her again is more painful than anything they could do to him. If this is Jeremiah, my heart is shattered, and I wish I’d never wished to know.
I hope it isn’t him, but let’s look at the comparisons.

If you watch Jeremiah in Cradled in Love, he is sombre, dispirited, not happy, although at times he does seem wistful. Something happened to make him this way, and I would guess something tragic. It could be said that what happened to the piano man is the very definition of tragedy. Murdered for a forbidden love, though we may not know why. Perhaps she already had a husband or lover, or maybe she was from a rich, powerful family (look at the house) and he might be a pauper and they fell in love against all odds but the family forbade it. We may never know why their love was forbidden, but it ended so tragically as to render a lingering spirit forever melancholy.

I can’t say with any facts that the piano man is Jeremiah, but I can say that there are instances of quite peculiar similarities. I’m sure you can see them too, can’t you?
Whether or not he is Jeremiah, and we may never know, the video is hauntingly beautiful yet with aspects of gloom and despair that I won’t get over anytime soon.

But if he is Jeremiah, I can’t even begin to voice the pain in my heart for him.

I believe that we both could talk forever about Moonlight Kissed and yet, we would not be able to either come close to the truth (if it ever mattered) or say all that we wish to say. To me everything falls into place in the end… the circle is complete. Because if you really care to look, if you are a tiny wee bit curious about the images called out by the music and the words… you’ll see this endless “Witchcraft” Poets of the Fall have, and that it always goes way past the confines of one song… one album… such intricacies and vision to show love as the most powerful way to live… and undoubtedly live on.

Thanks for reading,
Poets, thank you for Clearview!
Best wishes! ?

“Clearview is a clear view on things that you are unclear about basically, because […] it’s really, simply said it’s about asking. If you think you know something, that’s fine, but if you know you don’t know something, how do you get a clear view? It’s by asking. So, that’s basically what it’s about. But that’s a, I think also, a very big topic that we could really talk, like, a lot.”
– Marko Saaresto, August 2017 (transcript by Yours Truly)