As you all have realized by now, I’ve got this “thing” for Poets of the Fall which is quite new in my cosy household, but have, in fact, made their debut in 2003… so, not so new on the music scene. As I have written on the page “Series: Music Quotes“, a couple of weeks ago – during march 2016 – my husband made me discover the Finnish band, the so-called underdogs, Poets of the Fall. It took some convincing before I agreed to listen to anything but when I did, I was hooked. The lyrics are strong, the music fits completely to what makes me tick and the singer’s voice brings such an emotional range to the whole that I wish I had discovered them from the beginning of the band’s career. The music makes me so happy that I can barely believe my ears. Poets of the Fall is a musical force to be reconned with, period! Even my husband says: “They’re the best band in the world!” and believe me, he doesn’t usually say that kind of things, ever.

The band has released six albums since 2003 (not counting The Live in Moscow or the Compilation) and in an interview from 2012 with Yagaloo, Marko, the singer, roughly explains the trilogies concept. There is actually an interesting discussion going on around the subject on the band’s forum. Anyway, I got to read around and listen to interviews to grasp the concept since I have not dug myself into the albums as such. I am more of a “compilation making” gal, so I listen to all albums randomly and not as wholes… 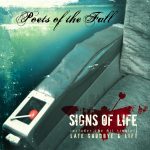 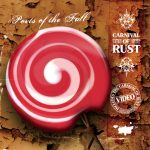 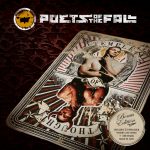 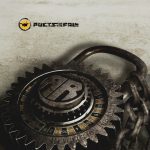 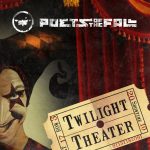 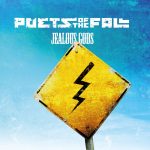 The band pushes further with the recurring appearance of made-up characters. One of the fans’ theory is that you have Zoltar and Jeremiah Peacekeeper who are the “noble ones” (found that on the forum I mentioned) ; Hamartia and Hopecatcher who are the “slimy ones”. I find it over simplistic and it is actually slightly inaccurate (in this interview from Musicalypse.net, Marko gives a clue about what Hamartia refers to).
My theory is inspired by what Marko Saaresto explained in another interview that I’ve read (but cannot find anymore, typical!). He said that the Harlequin-like character grows to become Jeremiah Peacekeeper. Inevitably, it is as he says, each album from a trilogy represents a moment in life such as “Birth, growth and then the outcome” therefore, the characters need to grow as well. From the first to the second trilogy, it feels like there is some kind of crossover by the Harlequin-like character and I cannot pinpoint where exactly. Nonetheless, the outcome of that character is, at the antipode of Jeremiah Peacekeeper for he becomes the Hopecatcher (not sure of the name).

Check the videos at the end of the post, and more on Poets of the Fall official YouTube channel.

If you do not care for such details, trust in the fact that the lyrics are a mine of thoughts led by the heart of their creator and enhance by a well-balanced music. All that to say that whatever the intent of the band, the effect is dizzying and I am fascinated by the music/lyrics associated (or not) with the mentioned characters.

Whether it is a ballad or not, the songs have a dynamic that I have never heard before and this makes it a very interesting music to listen to. Every song is like an onion, containing layers after layer one peels off to discover what’s hiding under. I found myself crying as I listened to “Sleep“, stopping breathing a few seconds during “Where do we draw the Line“, “Heal my wounds“, “Carnival of Rust” or “Kamikaze Love“. “Stay” and “Lift” put such a smile on my face, I mean a smile of happiness. Now, “Jealous Gods“, “Daze“, “Love will come to you” and “Choice Millionaire” hooked me good and proper; “Rumors“, “Brighter than the Sun” and “Rebirth” made me press the replay button a few times. Not to mention many other gems that I hope you’ll take the time to discover for you won’t necessarily find them on an album, but rather on EP or a Compilation; trust me, it’s worth the “lookit”.

These are of course a few examples among others to give you an idea of my sensitivity and sensibility. Do I get the meaning behind the words as Marko intended it? Probably not… I don’t really care actually. What I care about is how deeply moved I am when I listen to the songs, and to me, it is what matters most. Poets of the Fall , the Poets as I call them, work like my own personal bubble where inspiration is flowing freely within and around me. My mood swings have calmed down and no later than yesterday evening, as I was going to bed, I felt this wave of calmness wash over me (I listened to the Poets the entire day). It is difficult to explain, but I guess their music has entered my life at this particular crossroad to accompany me towards the next stage of my recovery and life. They sing mostly about love (both in a happy and sad way, to put it mildly) and I am one of those lucky women whose found her other half, which means that love becomes me.

I am not sure that this post does the Poets justice, but I guess that through my enthusiasm, you might actually understand how good they are and therefore support them by buying their albums (the seventh album announced for September 2016). Support them so they might get a chance to tour in your corner of the world.

Be kind, respect and love all life!
/Claire

Harlequin-like character (is he called Zoltar? maybe) – Carnival of Rust

Is the Harlequin-like character back? – Choice Millionaire (album Jealous Gods)

Poets of the Fall – A splendid toolbox